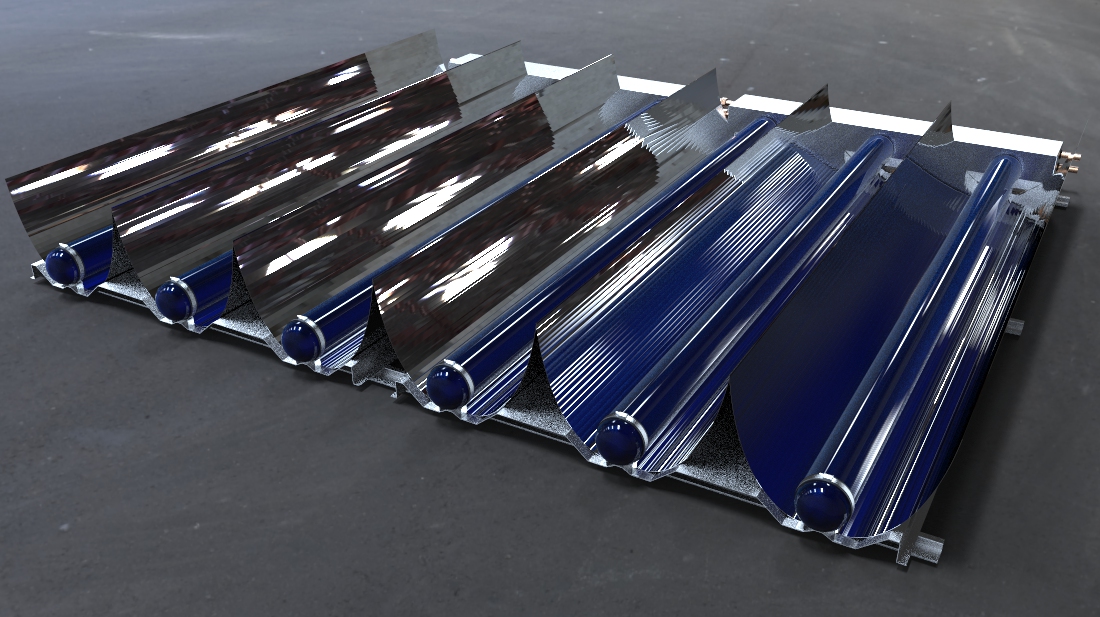 Artic Solar proposes to integrate a high temperature solar thermal collector and a proprietary steam generator to provide the steam and the required energy for a solar thermal distillation or evaporation system. The ability to generate steam on a continuous basis using water for the heat transfer fluid in the collector closed loop increases efficiency and lowers the cost of energy required for solar thermal clean water systems.  We have demonstrated the use of three XCPC collectors operating continuously at 305° F to power a 3⁄4 HP steam engine.

In fact, we were unable to scrub the heat from the solar array fast enough and the solar loop temperature increased to 386°F before our solar circulator failed from the high temperature.  This demonstrates the collector’s ability to provide continuous heat for the proprietary steam generator for the process.  This approach can reduce equipment for the mechanical system design, significantly reduce O&M costs and provide a cost effective improvement in clean water production.

The XCPC is a Non-Imaging Concentrating high temperature solar thermal collector manufactured by Artic Solar, Inc. in Jacksonville, FL.  The XCPC pairs a custom evacuated tube solar collector with an external non-imaging reflector in a non-tracking, roof or ground mountable system.  This combination enables the XCPC East/West design to cost effectively achieve temperatures in excess of 200°C at more than 50% efficiency – which current market incumbents cannot attain without tracking.

Efficiency is defined here as the percentage of solar energy hitting the collector aperture that is
converted to useful heat energy.  Flat plate and other evacuated tube collectors exhibit good efficiency characteristics at lower temperatures but heat losses mean that their efficiencies fall off rapidly at higher temperatures (~80-100°C).  The vacuum tube is not simply mated ad-hoc to a reflector; rather the concentrator and collector have been specially tuned to ensure maximum usage of available solar energy.

Read More About Our Technology

The collector has an exceedingly wide angle of acceptance – maintaining peak energy generation even when the light strikes it at a wide angle. The concentration ratio is 1.4 meaning the absorber receives an additional 40% of the suns energy allowing the collector to achieve high temperatures. The custom collector maximizes heat collection and along with its integrated fluid channels reduces component materials and costs. The XCPC has been under development for over 10-years and is currently at the commercial product stage.  Perhaps the greatest advantage of the patented NICC over competing high temperature solar thermal technologies (trough and linear Fresnel) that can achieve 120° Celsius and higher temperatures is the collector design. The other technologies are high profile (up to 20ft), have tracking mechanisms that require maintenance and thus require large land areas to be effective, and more importantly, present an open source of ignition with the use of oil as a HTF. The XCPC collects both Direct and Diffused radiation allowing the collector to generate high temperatures in any climatic region.  Aesthetics are also a concern – the NICC can be configured to be extremely low profile – unusual for linear Fresnel and trough systems. Each XCPC power rating is 1.235 KW and can be installed at a price of $1.20 to as low as $1.05/watt.